BassChain, an interdisciplinary group of five young and motivated students, took first place in one of the three tracks with their impressive presentation of a resilient, long-range tracking and monitoring system for cattle and livestock facilities using the Helium Network. The captain of the group, Bradley Bass, has family that has been working in small to mid-scale free range cattle operations for generations. “A solution for smaller and more sustainable food producers would be a win for my family, which allowed me to connect with the project on a personal level,” said Bass. “The future of food is regenerative, and thanks to companies like Helium and Mycelium these technologies are accessible and no longer reserved for corporate giants and feed lots.”

RazorBlocks, a team led by Adrian Ahlbrandt, also presented an innovative asset tracking solution, but more focused on the commercial logistics space. The team addressed the state’s plan to lead the nation in transportation and logistics over the coming decades. “It was a great opportunity to work with Mycelium Networks and solve a real business problem with blockchain technology.” added Ahlbrandt. “IoT has been something I’ve wanted to get into and the hackathon showed me what it was like to work in the field. From start to finish, it was a learning experience and if I could do it again I would.”

Another member of Razorblocks was Stephen Witty, who is no stranger to the logistics technology space. Stephen moved from a position as an IT leader at FedEx corporate to managing FedEx’s Freight R&D team, before eventually deciding to continue his education at the University of Arkansas. “The Hackathon was a blast, and the team at Mycelium was a great resource to us. The Helium network is perfect for hackathon projects since it promotes the very core ideals of decentralization and transparency. I see Helium as a contender for the future of enterprise asset tracking.” said Witty.

Helium911, another team of five, used Helium to redesign, recreate and vastly improve upon the well-known and outdated Blue Light concept that was built to address safety on college campuses. Rather than being a stationary, grid-tied, expensive payphone, their solution was powered by a solar panel and included a camera as well as a detachable tracking device that a user could take with them if they needed to flee or hide. “Working with Mycelium and the Helium network to improve Blue Light emergency systems was probably more fun than it should have been.” said the captain of the team Scott Eby, who is also the Associate Director of IT for University of Arkansas Athletics. “I worked on it for up to 12 hours a day until I had a functional prototype that I could go on stage and be proud of. The support from the folks at Mycelium was invaluable to my experience. They went out of their way to make sure I had all the tools I needed to succeed. And although my team didn’t take away a prize, I feel like it was a huge accomplishment.”

The month-long hackathon allowed the team at Mycelium to work closely with students interested in learning more about blockchain technology, and gave students exposure to companies working on blockchain right here in Northwest Arkansas.  Liam La Fargue, Mycelium’s Director of Growth, worked as a mentor to three of the six teams.   “It was very rewarding to be able to see these teams come together and each take their own unique approach to such a broadly relevant set of use cases.  What really stood out for me was the amount of variety and specialization within the teams, and their ability to combine business, hardware, and software knowledge to create a compelling product. I learned so much from them and am honored and humbled to have been part of it,” said La Fargue of the experience.  Mycelium is excited to see where the projects from this year’s hackathon lead, and are excited to participate in future projects with the Blockchain Center of Excellence. 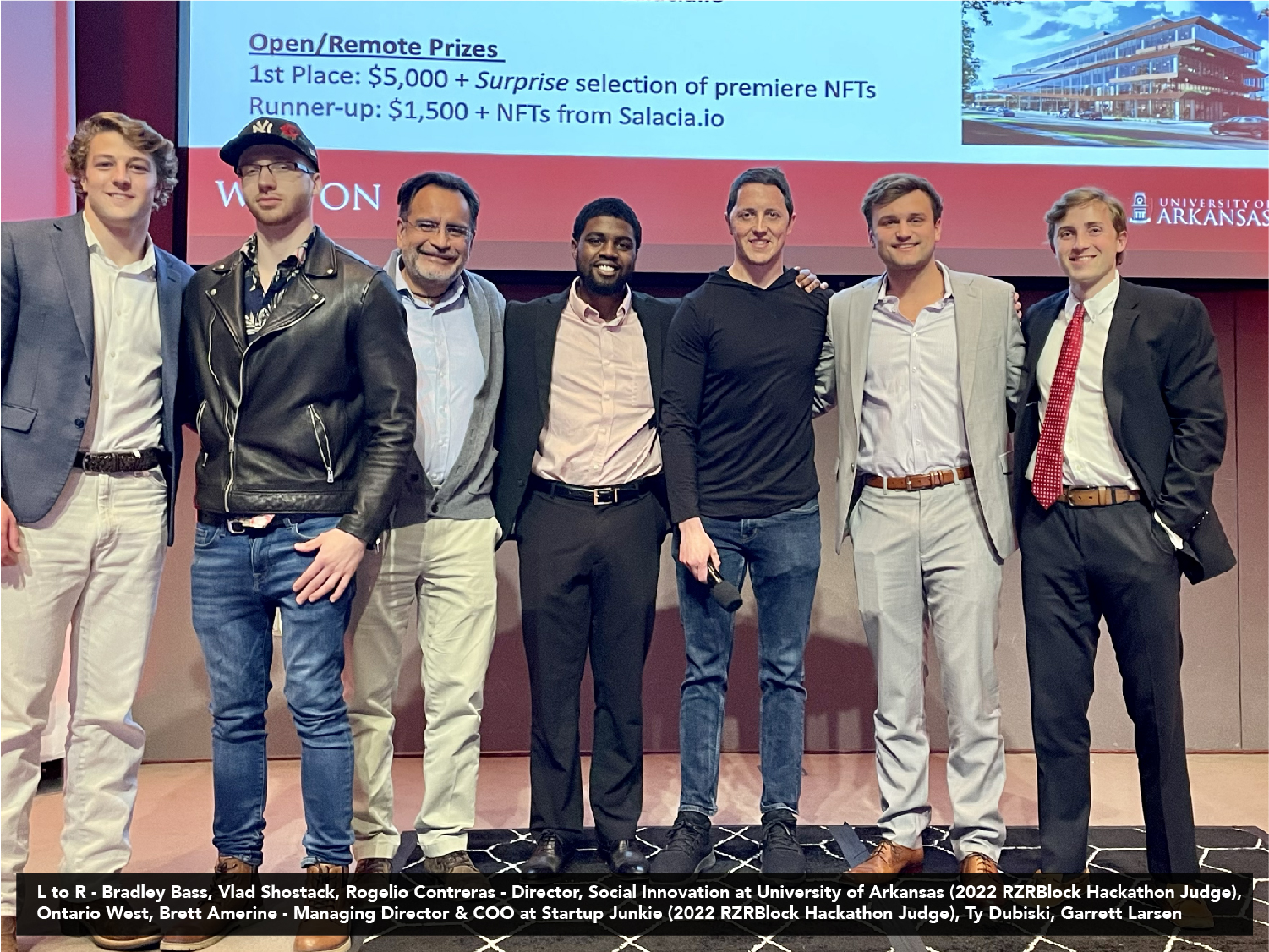